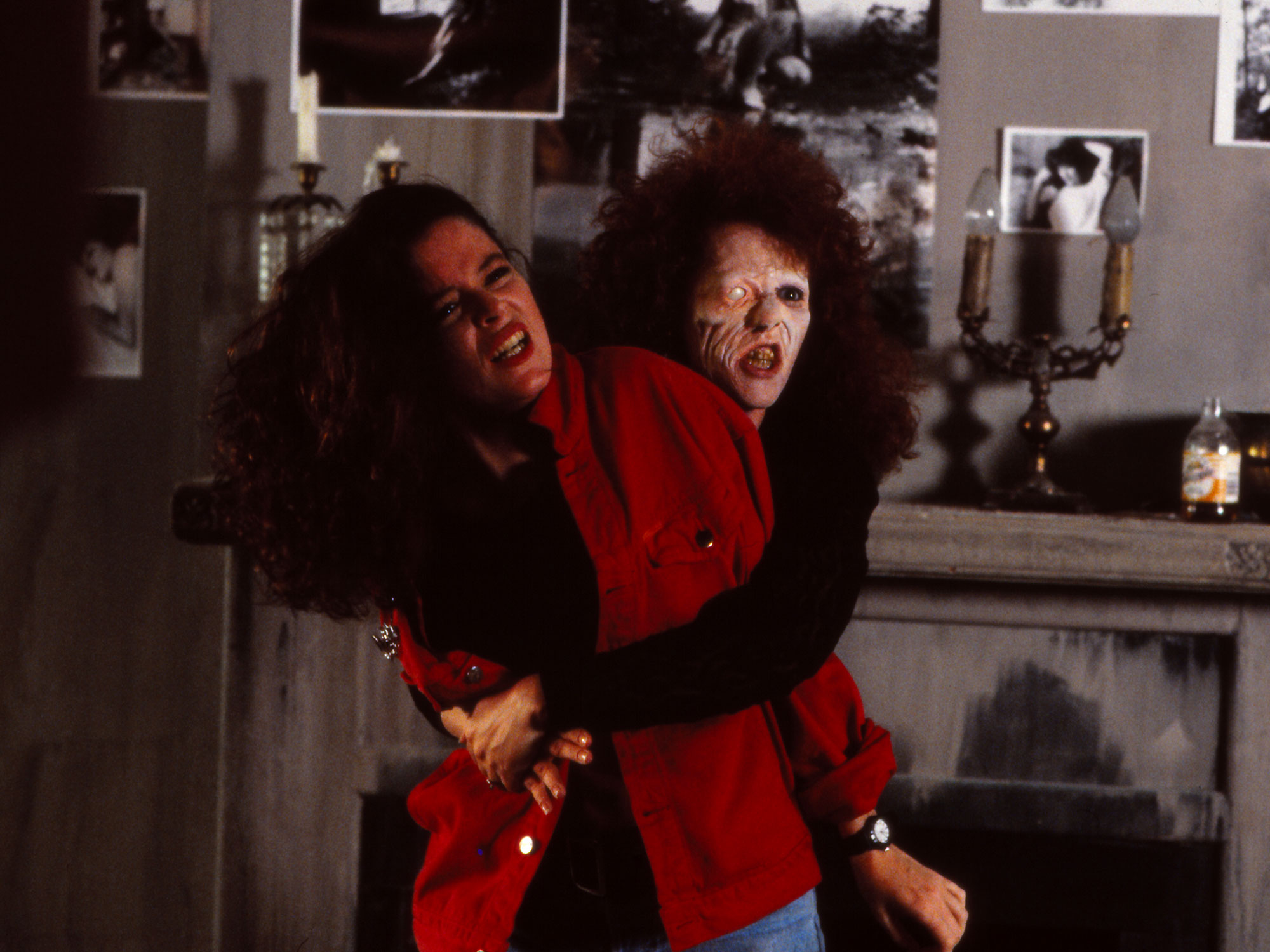 After a prologue showing woods at night, and a car driving away from a pair of bloody, naked bodies lying besides a fallen motorcycle, Deadly Manor (aka Savage Lust) cuts to a truck driving in broad daylight with a giant statue of a burger-bearing ‘Big Boy’ mascot (from the popular American restaurant chain) as its haul.

This is a way for Spanish director José Ramón Larraz not just to offer a foretaste of the murderous perversion to come, but also to establish the setting of his film, like its predecessor Edge of the Axe, in an America that is – in more than one sense – generic. For, derivative and not a little dull, Deadly Manor is horror’s equivalent of fast food, delivering exactly what viewers expect in portion-controlled, bland form.

The film was actually shot in upstate New York, but Larraz might equally, as with his previous features, have filmed all or parts of it in his home country. After all, while the remote and spooky mansion house of the title may boast among its features, as one character absurdly puts it in a recap seemingly designed for the trailer, “a smashed car outside, coffins in the basement, and scalps in the closet,” the one thing it never accommodates is authenticity.

The sense of artifice that quickly settles in is essential to the film’s charm, as are some highly idiosyncratic touches in the over-the-top climax – although elsewhere, the poor acting and tone-deaf, nuance-free dialogue will have you dying for more red sauce just to make it seem less like an insipid, production-line offering.

Mysterious hitchhiker Jack (Clark Tufts) gets off the truck, and thumbs a ride with six passing co-eds who are hoping that he will help guide them to Lake Wapakonope where they intend to go camping. Savvy viewers will recognise two distinct directions that this opening appears to be taking: the hitchhiker hell from the beginning of The Texas Chain Saw Massacre and the lakeside slashing of Friday the 13th. Before it can get to either of these destinations, Rod (Mark Irish) will turn off the highway looking for a place to rest for the night.

“Do you know where this roads leads to?” asks the group’s most nervous member Helen (Claudia Franjul), articulating the question that viewers may also be asking themselves. In a sense it is obviously leading to the manor house promised by the title, but even when it gets there, the characters keep suggesting established horror templates for a scenario that has not yet revealed its true identity.

So Peter (Jerry Kernion) – who wears a Godzilla T-shirt to signify his status as a horror fan – suggests jokingly that the figure whom only Helen saw at the upstairs window might be “a biohazard mutant zombie”; and when Helen insists that the house is “evil”, Peter again mocks her with an explicit reference to The Exorcist: “Maybe you’ll spit up peas soup and your head’ll turn around!” Peter expressly alludes to Dracula even before they discover the two coffins (marked ‘Amanda’ and ‘Alfred’) in the basement, and later wonders aloud: “What next? Uncle Fester on the patio?”

There are other elements of the manor that fit none of these prescribed genre models: the burnt-out car placed like a monument on a concrete pedestal outside the house; or the interior walls festooned with pictures of the same pretty (but “cruel” looking) woman; or the closet full of human scalps (which barely fazes anyone); or the crack that keeps visibly expanding along a plaster wall; or the masked woman who enters the sexual fantasies of sleeping Tony (Greg Rhodes), or appears at the window.

Amid all the characters’ speculative banter about the precise nature of the film that we are watching, what we do know (and they do not) is that their numbers are being rapidly reduced, slasher-style, by someone armed with a knife. Yet, in a sense, this is ultimately a sort of vampire film too. For its evil is not just a couple of deranged house owners (William Russell, Jennifer Delora), but also faded, decaying beauty vengefully preying upon the vitality of youth.

The problem, though, is in the execution – both literally, in the dreary repetition of the throat slittings, and more metaphorically, in the by-numbers plotting, non-existent characterisation, perfunctory lines and poor performances. An established maestro of mood in films like Symptoms and Vampyres, Larraz certainly squeezes all the gothic atmosphere that he can from his country-house location, and playfully misdirects viewers in a knowing manner with a range of subverted horror tropes. And if you get through the long, meandering middle section, the ending is insane.

Still, the feeling remains that this is far from Larraz’s best work, and that he too, along with the film’s antagonists, is struggling impossibly against aesthetic decline. Deadly Manor was to be Larraz’s final American film. He made just one more feature, the Spanish cop comedy Sevilla Connection, before retiring permanently from filmmaking.

Deadly Manor is released on Blu-ray by Arrow Video in a brand new 2K restoration from the original film elements on 17 February.

The post Discover the final horror from one of the genre’s unsung greats appeared first on Little White Lies.